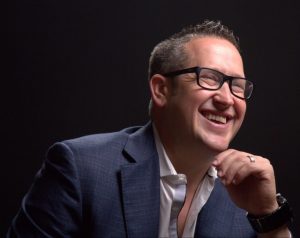 Orlando, FL – July 27, 2020 – The Heartland Emmy® Chapter hosted a virtual award ceremony on Saturday, July 25th, to honor the best of the best in the television industry. The film, “Freedom Isn’t Free: The Folds of Honor Story,” produced by DNA Films, was nominated in three categories: Director, Editor, and Documentary- Topical, and took home the Emmy® awards for both Editor (Nick Ruff) and Director (Nick Nanton). This win for the film’s director, Nick Nanton, marks his 16th Emmy® Award win.
The documentary, “Freedom Isn’t Free: The Folds of Honor Story” focuses on the incredible story behind the nonprofit organization, the Folds of Honor foundation and its founder, Lt Col Dan Rooney. It tells Lt Col Dan’s incredible story as an Air Force F-16 fighter pilot that returned from his second tour of duty and the pain he saw many families facing when a loved one in uniform is disabled or fallen.  His commitment to honor that sacrifice by educating the legacy of his fellow service men and women led to the creation of the Folds of Honor Foundation to provide educational scholarships to the families of American heroes.
“It was an honor to share the story of Lt Colonel Dan Rooney and Folds of Honor,” said Nick Nanton. “They are stepping in and taking care of military families in their greatest time of need. I hope that everyone takes the opportunity to watch this film to learn about what the Folds of Honor organization is doing and how they can get involved.”
Known as a leading expert on branding and storytelling, Central Florida-based director and producer Nick Nanton, has created over 60 films and one sold-out Broadway show. These films have earned him 16 Emmy® Awards and 36 nominations. He’s directed and produced documentaries on the likes of Rudy Ruettiger of Notre Dame fame, Peter Diamandis, founder of the Xprize and first private spaceflight; and on organizations like Operation Underground Railroad, Folds of Honor, K9s for Warriors and more.
The Folds of Honor documentary, as told through sit-down interviews with a wide range of cast including Lt Col Dan Rooney, Dierks Bentley, Jack Nicklaus, John Rich and Larry the Cable Guy, takes you on a journey with families that have paid the ultimate sacrifice and the many lives that have been changed due to the mission of one man and the support of thousands more. Including the amazing producers that supported the film (Executive Producers: Perminder Chohan, Chris Goff, Doug Hanson, Kevin Hodes, Jennifer Kauffman, Nina Kelly, Bo Manry, Susan Mercer, Tom Otley, Darren Tong, John Trowbridge and Co-Producers: Alexandra Allen, Ginger Bell, Lance Drury and Edward Mafoud.)
See how the next generation of American heroes’ lives have changed by watching the documentary on Amazon Prime Video now. “Folds of Honor: A Fighter Pilot’s Mission to Deliver Healing and Hope to America” (renamed prior to its Amazon release) is currently free to anyone with an Amazon Prime account and can also be rented or purchased through Amazon. Every stream of the movie generates a donation back to the Folds of Honor foundation to help fund scholarships for more military families.
About the Folds of Honor Foundation:
Folds of Honor Foundation was founded in 2007 and is a registered 501(c)3 nonprofit organization that is dedicated to providing educational scholarships to the spouses and children of disabled and fallen service members. Over 25,000 educational scholarships have been awarded since the foundation started.
To learn more about the Folds of Honor Foundation, please visit https://www.foldsofhonor.org/about-us/
About Nick Nanton and DNA Films®:
DNA Films® is led by multiple Emmy® Award Winning Director and Producer, Nick Nanton and Emmy® Award Winning Producer, JW Dicks. Dicks and Nanton have produced multiple award winning films including Operation Toussaint, Dreamer, Folds of Honor, Visioneer: The Peter Diamandis Story, and Rudy Ruettiger: The Walk On. Combined, they have produced and directed more than 500 television episodes and dozens of films. Dicks and Nanton’s goal is to bring real stories to the screen as a means of leading, educating, and inspiring viewers through film.
###
Contact:
Brittany L. Barocsi
Dicks + Nanton Agency®
800-980-1626
[email protected]